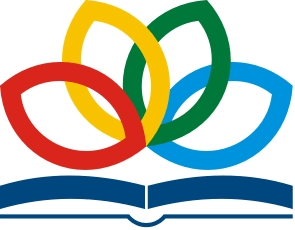 At Paul George Global School, we believe that the art of acquiring knowledge is the one way to enter the sea of enlightenment. Hence, our logo is an amalgamation of the traditional values of the Indian system and the modern ideas of facilitating passion through perseverance. The Lotus is associated with Goddess Saraswati – the Hindu Goddess of Knowledge, Wisdom, Learning Arts, Performing Arts, Music, and Speech. It signifies supreme knowledge. A beautiful blossomed Lotus flower also stands for purity and energy.

Red is the colour of fire. It represents energy – it is the colour of COURAGE – the first of the character values possessed by Late Shri Paul M George. It signifies physical strength as much as it represents mental resolve. Similar to Fire, Courage is a source of energy that drives the ‘world of action’ and facilitates the journey from imagination to fulfilment.

Yellow represents Compassion – The colour of sunshine. Sun is the eternal symbol of compassion to one and all, not only living on this earth but also in the larger universe too. Without the sun and its energy sustenance of any living form is practically unimaginable. Just as the sun expels darkness from the physical world by spreading its sunlight; similarly, Compassion is a unique value that eliminates sorrow and miseries of the world by its true manifestation.

Green the colour of mother nature symbolises Equality. Treating everyone with equality is a rare virtue; possessed by Late Shri Paul M George. Drawing the analogy to Mother Nature who equally shares all her resources so readily and impartially with all her children. This showering of resources is devoid of any disparity and differentiation. Hence mother nature is treated as the epitome of Equality, which is best represented in Green.

Blue stands for Integrity which tops all character values existent in the world – it is possibly the most supreme of all virtues that a human can possess. It is often said that there isn’t any virtue as virtuous as Integrity. A human being having great integrity is complete in his character and divine in his attitude.

The four petals forming a lotus symbolise the character values of Late Shri Paul M. George – Courage, Compassion, Equality and Integrity that form the foundation stone of the management’s philosophy. It also shares the management’s passion to facilitate and inculcate these four values in all the students of Paul George Global School. The colour of each Lotus petal is carefully selected to represent the colour of each of these character values.

over 59 years of excellence in education”